Face It -- It's Complicated!

Every discipline has its own rarefied language which one learns in order to be fluent among its devotees.  So it is with horology.  As I read about watches, I didn't expect to find a  word that on one hand is  the title of  one of my favorite films; and on the other hand refers to time pieces that offer more than the  display of hours, minutes and seconds.  Well surprise, surprise, "It's Complicated."

I mean that literally.  The 2009 movie, It's Complicated starred Meryl Streep, Alec Baldwin, and Steve Martin along with a very talented ensemble cast.  For a watch to be described as "complicated," it has to have that same ensemble quality with varying numbers of extra functions -- otherwise it's just relegated to being "simple." For starters, a complication can include:

Like a fine actor, a watch's complications demonstrate its maker's knowledge, craftsmanship, and understanding of complexity and technical execution. The Swiss company, Franck Muller holds the distinction of producing the most complicated wristwatch in the world, the Aeternitas Mega 4 Grande Sonnerie Westminster Carillon with 36 complications, 25 of them visible.  It made it's debut in Monte Carlo, in 2009--the same year the movie It's Complicated was released. Price:  $2.7 million!

Regardless of your level of fluency, I'd love to receive your comments on how you live with your complications (including your watch make and model); why they are important to you; and how they enrich your life.

If you've been watching the Olympics in Sochi, you've probably noticed that OMEGA is the event's official timekeeper.  What is not as well known is that the company has had that distinction for 82 years, ever since the 1932 games in Los Angeles. In that year, OMEGA displaced the Heuer Company which had been the official games timekeeper for three previous Olympiads.

For Sochi, OMEGA has definitely gone the distance with distinction. According to an OMEGA February 7, 2014 press release, “the brands presence will be impressive with 230 tonnes of timekeeping equipment, 260 on-site professionals and 170 trained volunteers.” When we hear of medalists’ times being separated by just 1/100th of a second, it makes us appreciate the enormity and complexity of this timekeeping effort.

Just a bit of history to put OMEGA into context:  The company was founded by Louis Brandt in La Chaux de Fonds, Switzerland in 1848; but was not named OMEGA then.  By the 1880's, the company which remained a family enterprise with Brandt's son's succeeding their father (Louis Brandt et Fils) had moved to Bienne and was a high volume producer of pocket watches making more than 100,000  annually.

Reportedly, the family changed its company name to OMEGA at the suggestion of a banker friend in the early years of the 20th Century.  A great branding idea, apropos for a company aspiring to have its timepieces valued as the last word point in watchmaking — just as the letter omega (Ω) gives finality to the Greek alphabet! The company subsequently changed its name to Louis Brandt et Frères-Omega Watch Company.  It debuted as OMEGA in 1909 at the Gordon Bennett Cup, the world’s oldest international balloon race gas which that year had Zurich, Switzerland as its launch city; the objective being to fly the furthest distance from the launch site. That year the Swiss team didn’t win the race, the Americans’ did.

Returning to OMEGA’s presence in Sochi, the company has created a ladies’ and men’s commemorative special edition Seamaster Planet Ocean wristwatch for the event.  Each edition is — you guessed it — limited to 2014 pieces.  Sochi could have no better OMEGA tribute.

If this post has piqued your interest, you can find  more on OMEGA’s Sochi activities and its Olympic past on the company’s website, http://www.omegawatches.com/planet-omega/sport/sochi-2014.

Posted by www.wristwatchredux.net at 11:54 AM No comments:

"What a Difference a Dial Makes"


This is my first blogging experience and my inaugural post.  So to kick off this personal expository adventure, I thought it would be fun to share my "Alice in Dial Land" history as part of my online persona.

One of my first recollections of being attracted to watches is that the White Rabbit had one and that he made quite a literary fashion statement to Alice when he pulled it out of his waistcoat pocket.  The watch obviously kept accurate time, as the rabbit exclaimed, "Oh dear! O dear! I shall be late."  The bizarre trifecta that he had a waist coat, a pocket watch, and a speaking voice before popping down the rabbit hole was all Alice needed to topple down after him and begin her own adventure.

Fast "descent " to today and my decision to wear the White Rabbit's likeness every time I write about my own observations and discoveries and gain more knowledge and understanding about the wonderland of watches, past and present. 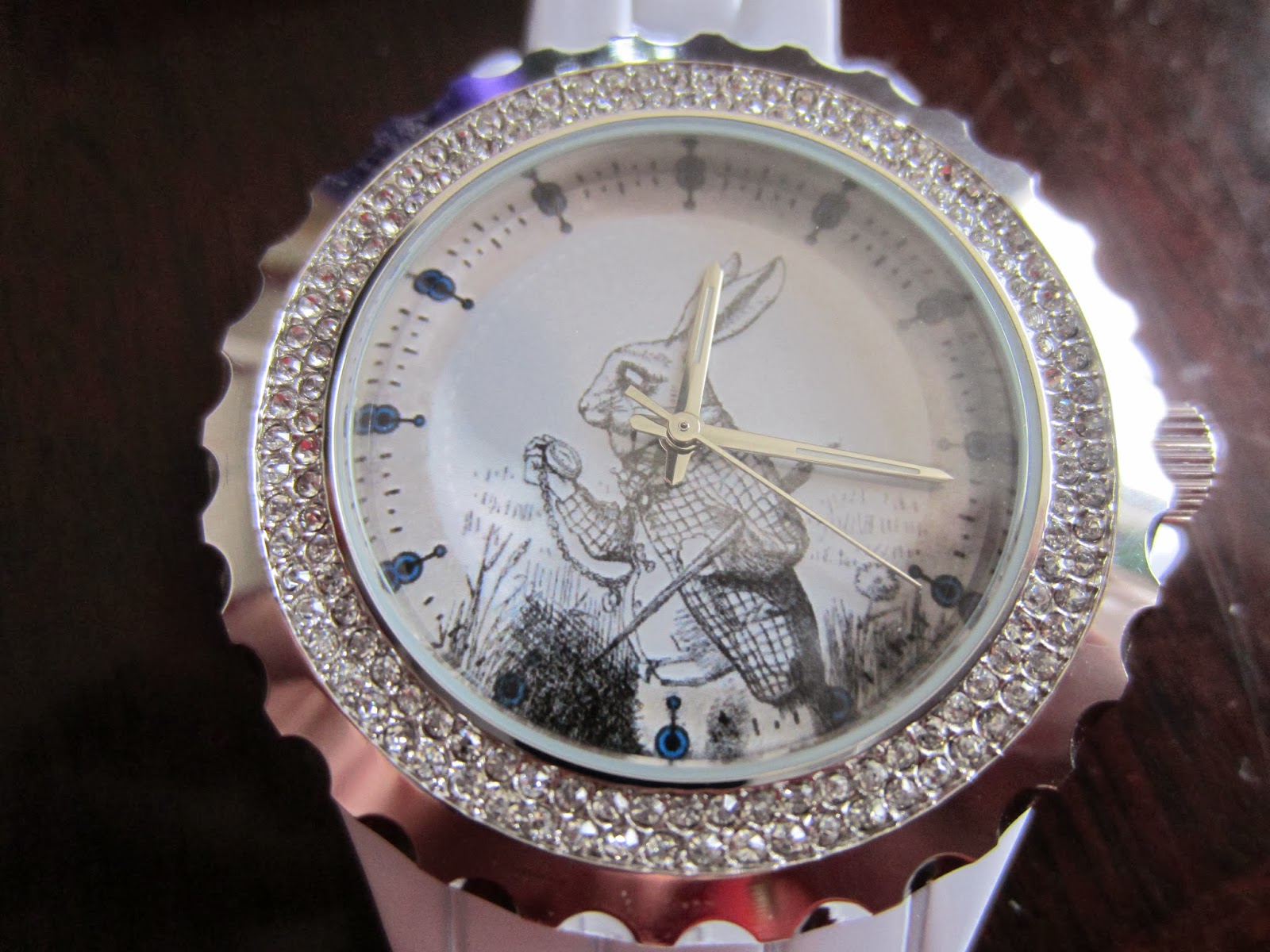 For the curious, I ordered my White Rabbit watch through Zazzle  which offers an entire range of Alice's Adventures in Wonderland faces by oddFrogg.   These now out-of-copyright images were originally drawn by Sir John Tenniel who illustrated  not only Lewis Carroll's Alice's Adventures but also Through the Looking Glass. To see all of Tenniel's  Alice images, check out  Project Gutenberg's  EBook, Tenniel Illustrations for Carroll's Alice in Wonderland.

I'd be interested in hearing others favorite watch dial stories or reminiscences.
Posted by www.wristwatchredux.net at 3:00 PM 2 comments: