Coco’s Camellia: A Floral Tourbillon that Needs No Fragrance

Each March, thousands descend on Basel, Switzerland to see the latest in wristwatch luxurity and technical masterpieces with opulent complications.  This year, Baselworld 2014 with its Brand Book focusing on the  theme of  “Brilliance” opened on March 27.  It closes on April 3.

For me, one of the most dazzling and fashion-evocative women’s wristwatches is the House of Chanel’s 2014 Première Flying Tourbillon  which I found covered by jewelry superstar media commentator  Maria Doulton in her Jewellery Editor  newsletter.   There will be only 20 pieces in this limited edition which has 169 diamonds and 63 baguette-cut pink sapphires.  These gems are beautifully set around a white gold case and crown. 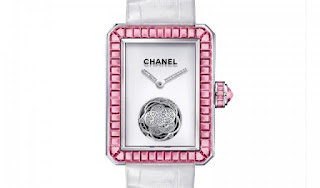 As for technical brilliance the watch has a 225-part flying tourbillion movement in the shape of Gabrielle Chanel’s favorite flower, the camellia which offers its geometrical petal shape as the design basis of the tourbillion. There’s no concise explanation of a “tourbillion” so for blog purposes, I’ll give you Donald de Carle’s definition from his Watch and Clock Encyclopedia, 3rd edition, 1983:  “A watch in which the entire escapement is fitted into a cage or carriage and the complete assembly then revolves.”

The Chanel flower tourbillion  keeps its own botanical-inspired time performing one rotation each minute with the flying tourbillion’s petals indicating each passing second — horticulture and horology perfectly in time with each other.

Just a word on Chanel and her affection for camellias.  Lisa Chaney in her book, Coco Chanel:  An Intimate Life, (Penguin Group, 2011) writes that Chanel probably first used the floral motif embroidered on a blouse in 1922, and by 1924 material renderings of it were added to her clothes.  Since the camellia  does not have a fragrance, wearing it does not compete with any perfume one also is  wearing.  The 2014 Première Flying Tourbillon is said to visually reference this unique  floral feature with its crown in the shape of Chanel’s No. 5 perfume bottle stopper.  I’d call that a semiotic show stopper which this time piece certainly is!


Posted by www.wristwatchredux.net at 3:33 PM