Recently, through a blog posting by the Gevril Group showcasing the Ferrangamo Buckle 2014 Christmas Edition Watch Collection, I discovered the French term, guilloche, an ornamental turning process popular with woodworkers and metal engravers over the centuries. At the heart of the guilloche design process is the creation of repeating, intricate geometric intertwining of lines on an object. This is done through an engine turning process which can cut a myriad of geometric patterns in a rotating metal surface using a stationary cutting tool called a "rose engine." A similar type of engraving can be done with a straight-line engine when vertical or horizontal patterns are desired.


Most watch aficionados associate the term “repeater” with a complication using sound not sight. A watch repeater allows the wearer to tell time by sounding the last hour and quarters and minutes at will.  No need to look at the dial—your ear tells you the time. However, in this blog, I’m highlighting two companies, one foreign and one domestic that are using guilloche to add distinctive finishing background beauty to their watch dial and component designs.

First, Salvatore Ferrangamo.  Ferragamo, with headquarters in Florence, Italy has been known for decades as a worldwide fashion taste maker.  Perhaps best known for its founder’s reputation as a master shoe designer for early Hollywood stars and such innovative shoe designs as the cork wedge, the invisible sandal and the caged heel, the company also now occupies a significant fashion niche in the affordable luxury watch market.

Ferrangamo introduced its first timepiece in 2007 and now has 14 distinctive collections.  The one collection that I particularly like is the Buckle Watch Collection which debuted at Baselworld earlier this year. It predominantly incorporates guilloche as its visual Pièce de résistance and is a tantalizing complement to its asymmetrical dial and case shape of Ferragamo’s distinctive, trademarked  Gancino hook.

For the holidays, the 2014 Christmas Collection with its guilloche design reminds me of contemporary fir tree tepee-silhouettes growing upright and side-by-side in a futuristic forest ready to be harvested and ultimately trimmed in a family’s living room.   The dial bursts with vibrant, Christmas ornament color. Four genuine diamond indices sparkle at 12-3-6- and 9 o’clock.  It comes with fuchsia or red vegetable tanned calfskin wrapping straps – or if you prefer, Ferrangamo’s classic beige leather. The Gervil Group  is the US and Caribbean agent for Ferrangamo time pieces.


Second, RGM Watches.  For the domestic bespoke among us or just bloggers like me fascinated by elegance and its technical back story, the RGM Watch Company, founded in 1992 by American watchmaker Roland G. Murphy is a
guilloche crafting powerhouse.  Located in the small borough of Mt. Joy, (Lancaster County), Pennsylvania --Amish country America -- the firm prides itself as a place where “modern manufacturing co-exists with antique, hand-operated machinery.”
This is true when it comes to its engine turning craftsmanship by which it finishes watch parts including cases, dials and movements. Additionally, it can integrate stunning guilloche patterns in its timepieces for individual customers.
The following images of its guilloche gallery are taken from its website and illustrate its amazing engine turning technical and creative design virtuosity. 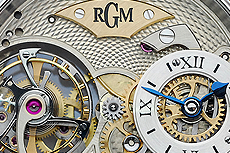 Also, RGM offers one of my favorite watch videos on the engine turning process. 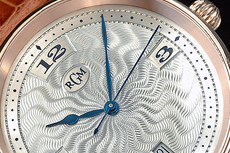 Just a quick professional endorsement for Roland Murphy.  He’s been a member of  the National Association of Watch and Clock Collectors (NAWCC) since 1981, an association that I am also a member! Through a recent hosting and tour of his clients and press at the National Watch and Clock Museum in Columbia, PA he was able to help with a donation of over $2,000 to the museum.


Watch my blog for more postings on timely philanthropic contributions both large and small.  A posting series called, Giving Time is in the works.

Posted by www.wristwatchredux.net at 5:57 PM