Heads Up!  Eyes Skyward! Next month on July 21th, the moon will be beckoning -- a waxing crescent. On earth, we’ll be celebrating the 46th anniversary of  Apollo 11 and the first manned lunar landing.

So in anticipation of the event, it’s a great time to remember the NASA/OMEGA contribution in taking time into space.

A sensational product placement story for Omega that lives on today.

On July 21, 1969, Edwin “Buzz” Aldrin, Jr., Apollo 11’s Lunar Module (LM) pilot stepped onto the moon.  He was wearing his NASA supplied OMEGA  Speedmaster   — making him the second man to make the step; but the first one to be wearing an OMEGA when he did so. Mission Commander Neil Armstrong, the first man out of the lunar module hatch to walk on the moon had left his Speedmaster in the LM!  Nevertheless, 600 million people watched the live transmission of the event.

At Baselworld 2014, OMEGA celebrated the event with its 45th Anniversary edition limited to 1969 pieces.

Omega knows the power and panache of its NASA relationship. Consequently, it has broadened its Speedmaster Moonwatch editions to commemorate historical achievements of NASA involving a Speedmaster.  For example, OMEGA did an Apollo-Soyuz 35th Anniversary Limited Edition in 2009 with a meteorite dial.

The dial features a special 14 seconds counter having a text that reads, “What could you do in 14 seconds?’  This is a direct tribute to the Speedmaster used in the Apollo 13 mission during which the watch precisely timed a 14 seconds mid-course correction. And then there is “Snoopy,” belly-flopped with nose on the 9 o'clock sub dial horizon.


The NASA/Omega story continues in both celebrity celebration and bibliographic forums.   On May 12th this year, "An Evening in Space," a special event hosted by George Clooney as one of OMEGA’s brand ambassadors was held in Houston, Texas. It honored “OMEGA's continuing commitment to space exploration.” Astronauts Gene Cernan, General Thomas Stafford, Captain James Lovell were among the feted guests.

And a new book has been published, titled Moonwatch Only:  The Ultimate Omega Speedmaster Guide. Written by watch collectors Anthony Marquié and Grégoire Rossier, it contains nearly 500 pages and more than 1,000 color illustrations.  According to a review of it in  WatchTime  (February 2015), it contains information about not just the various models of Moonwatch through the years, but also about its components, construction and packaging. Detailed images highlight the key features of each movement.” Additionally, there is a section to help consumers choose the Moonwatch model that has the features they want.” 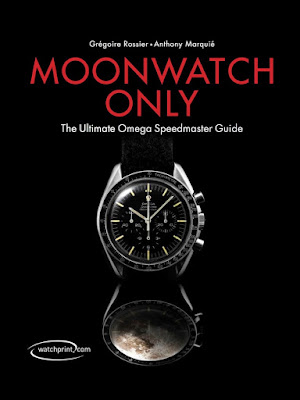 There is not enough time nor space to cover this fascinating story here.  As space exploration and discoveries continue, so too will time pieces, their complications and engineered capabilities continue to make an invaluable contribution to history.
Posted by www.wristwatchredux.net at 3:57 PM