World time has gotten flatter, faster, and more visual -- compressed onto our flat screen TV's, through our 24/7 cable news access, and on some highly complicated wristwatch dials.

We now live in all 24 time zones colorfully, simultaneously and with wrist defining flair. That's what came to mind when I saw the Louis Vuitton advertisement for its Escale Time Zone Watch (Wall Street Journal, March 17, 2016).


But hold on.  This post's not about that watch but three of its 60 year old predecessors which were equally impressive in their own time, 1956. That was the year the Hamilton Watch Company introduced the Cross Country and Trans-Continental models for men; and the Starflite for women.

In that year, according to the U.S. Bureau of Transportation Statistics, there were 46,004 "Revenue Passenger Emplanements." In other words, that's the total number of either originating or connecting passengers boarding aircraft in the US. Hamilton had an existing and growing market beyond the railroads.

[Quick Time Zone Tutorial: Time zones worldwide are based on longitudinal/solar calculations. Each time zone represents 15 degrees of longitude, roughly the distance covered by the sun in one hour. US National Time Zones (Eastern, Central, Mountain, and Pacific) were an outcome of the nation's need to standardize railroad passenger and freight transportation in the late 19th Century to avoid the possibility of collisions and synchronize destination departure and arrival schedules across cities and states.  It was not until March 1918 that Congress officially established the four-zone system by passing the Standard Time Zone Act.]

National advertising was all important for this Hamilton innovation. The company featured the Cross Country and the Trans-Continental models in Time Magazine's March 26, 1956 issue emphasizing how wearing time when traveling or even using the telephone can cross time zones, solidify communications, and presumably clench deals.

The ad goes on to describe how to interpret the dial settings to read one's time in place and the time in a desired second place: 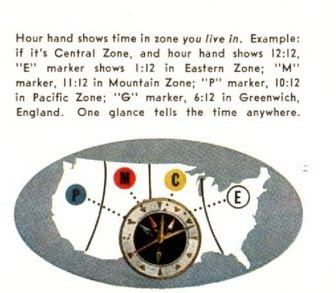 The watch on the left in the advertisement is the self-winding Trans-Continental  which was also shock-resistant and waterproof. (The self-winding feature was a new Hamilton innovation in '56.) The 10K gold-filled case with strap retailed for $95 ($835.65 in today's dollars); and with an 14K gold case, $185 ($1,627.33) in today's dollars adjusted for inflation). Its dial face had a map of the United States with the time zones marked accordingly.

* Adjusted dollars are derived from the online US Inflation Calculator.

Posted by www.wristwatchredux.net at 10:04 AM