It bothers me when someone says, It's a Waste  of Time. No choices ever are truly wasteful. Time is something that once spent can't be redeemed except through reflection. Disney's latest Lewis Carroll adaptation, Alice Through the Looking Glass is at times tedious and visually unbearable, but not completely unwatchable.

It does give me the opportunity to do a fanciful post about a film that already has received the critics' Rotten Tomatoes' -- Rotten Tomatometer rating.

My first impulse after seeing the movie last week, was to check out how pervasive its characters are in Zazzle's watch designs and in the Disney Store online. Sure signs of popular pablum. Yup. They're -- There.

Zazzle has character watch dials galore with Alice, the Cheshire Cat, the Mad Hatter, and the Red Queen.

Or if you're impossible to please and prefer plastic, get it with your choice of three face designs, 14 top band colors, 13 bottom band colors and 13 keeper colors (the color of the little part of the watch that is holding the watch band).

The Disney Store didn't have Looking Glass movie character watches. However, it did have character tea time petit fours plates from the Mad Hatter's Party. In the film, their counterparts sit on It's Always One-Minute-to-Tea Time table. 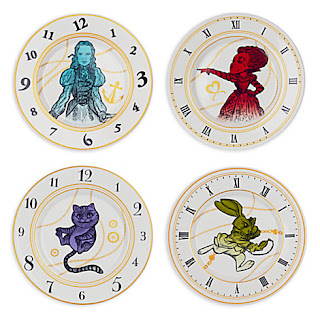 Where am I going with all of this?  The horological significance and value of the my movie experience, of course.

The best way to sum the movie and my time spent watching it, is to call it a Time Crash. It's an insipid  special effects mash-up with the character of Time (Actor Sacha Baron Cohen) as a clock-like humanoid disc jockey. He's villainous of sorts but still a likeable time-punster. He can make entertaining time-chatter even if it's predictably cliched.

He's the keeper of the Chronosphere, a mechanical golden globe that runs all time, past and present, and is housed in his palace. The Chronosphere is akin to a gyroscopic disco ball at a bad rave dance party.  Everybody wants to possess it and take it home as their all-time party favor.

The Red Queen (Helena Bonham Carter) wants it to destroy time; Alice (Mia Wasikowska) and her ally, the White Queen (Anne Hathaway) want it to save the Mad Hatter (Johnny Depp) by reuniting him with his family. It will also allow him to recover from his deathbed and reinvigorate his chromatic mascara (which by the way looks reminiscent of the top and bottom band colors available for Alice's Believe in the Impossible Wristwatch).

Thoroughly confused? So is the film. The good news is that at its end, Alice climbs back through the Looking Glass, reunites with her mother, forms an international trading company and sails off to China -- presumably to export  Empress Dowager gowns back to Victorian London fashionistas.

AND I can go back to constructively and coherently blogging about wristwatches and time.


Posted by www.wristwatchredux.net at 3:26 PM