Chanel’s classicism never ceases to amaze and its latest wrist watch advertising campaign is no exception.  Released as video shorts and a series of  two-page black and white spreads this June in such luxury glossies as WSJ Magazine, each covers two central actors: the human body and the hands' placement on a Chanel watch face. The timing between the two is an exciting Everything in the Now.

It’s the visual congruences between creatively positioning the axes of the human form: torso, arms and/or legs replicated by the positioning of the dial hands that gives the campaign its innovation and freshness. Gone is the cliched watch hands' emoticon advertising standard of ten minutes to two subjecting us to a suggested happy dial face and a brand's name or logo.

For Chanel, each image sequence, whether print or video, visually defines what it means to be in The Chanel Moment i.e. L'Instant.

One of my favorite print/video combo's is below.  Three minutes to one. No better time for a summer's drive on an imaginary Riviera! 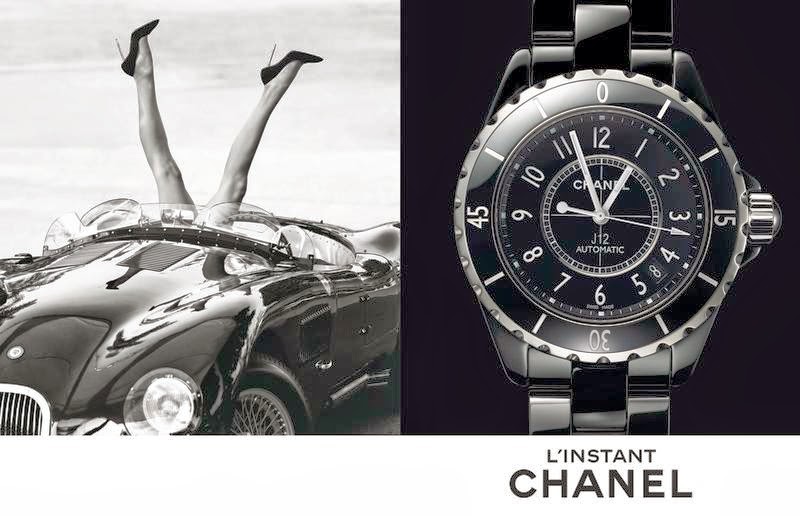 The photography was done by acclaimed 70 year-old French fashion photographer, Patrick Demarcheiler, who some readers may remember appeared in the documentary, The September Issue about Anna Wintour and American Vogue. Carlyne Cerf de Dudzeele did the smartly magnificent model styling.

This is the first time in 20 years that Chanel has featured its watches in an advertising campaign.

I hope that the summertime activities Chanel has chosen including sunbathing, swimming,  sailing, and motoring will be followed by wintertime’s  skiing, ice skating, sleigh riding and a relaxing fireside après ski gathering, all exemplifying  L’ Instant. Selfish me, but I'd also like to have at least another seasonal pairing of  Chanel and Patrick Demarcheiler/Carlyne Cerf de Dudzeele.
Wouldn't you?

Posted by www.wristwatchredux.net at 4:30 PM